Football is the world’s most widely played and enjoyed sport, and also one of the oldest, but where did the beautiful game begin?

Many people claim that football originated in Ancient China, where the traditional Chinese and Korean game of Cuju, or Tsu Chu, where participants would aim to keep a ball in the air for as long as possible without using their hands. It started off in the 3rd century BC as a military training exercise, which was spread throughout southeast Asia. Cuju is officially recognised by FIFA as the earliest ever record of a game that evolved into football.

There were also records of a game played by Roman soldiers where they would attempt to kick or throw an object between two markers, with a designated player standing between them, however, this is far less well documented that Cuju.

There is very little evidence of football-like games for a very long time after the Romans, however, during the dark ages, a game called ‘mob-football’ became popular across Britain and France. Mob football consisted of two teams battling against each other to get an inflated pig’s bladder to a certain point.

The teams in mob football often had over a hundred members, as most men in the village would join in, and the ‘pitch’, if you can call it that, would be more like a cross-country course, spanning between the two villages facing off against each other and often requiring literal miles of running to even reach the goal. The rules were pretty much ‘if it doesn’t kill them, it’s allowed’.

The game clearly caused masses of damage to both the landscape and the participants, to the point where that in 1314 King Edward II tried to ban the game. He proclaimed “There is a great noise in the city caused by hustling over large balls, from which many evils may arise which God forbid. We command and forbid, on behalf of the King, on pain of imprisonment, such a game to be played in the City”. Basically, “It’s really loud and people are getting hurt, so I’m banning it”. 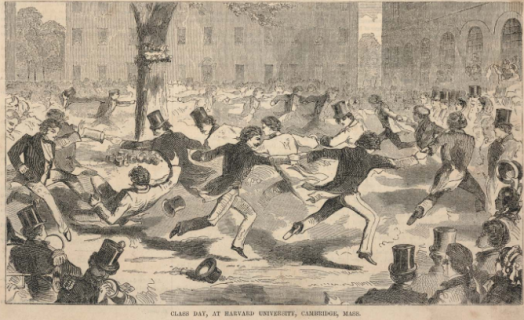 Up to 60 attempts were made to ban football within England before the 1600s, when it was finally made legal. The game was clearly still frowned upon by the upper classes, however, with Shakespeare himself using “football player” as an insult in his play ‘King Lear’ and also within ‘A Comedy Of Errors’. However, in King James I’s ‘Book Of Sports’ in 1618 he encourages Christians to play the game on Saturday afternoons, as a way to rebel against the strictness of the Puritans.

The rules of the game were finally cemented back in 1856, where it was declared that football was a game where players must put a ball between two sticks without using their hands, and the game we know and love was born.

There were, however, very few regulations on the height of the goal, and more often than not a string was hung at the height of the goalkeeper’s highest reach-point and this was declared the highest the ball may go in the goal. Similar rules were used at Rugby School, where Rugby was created, which is one of the reasons why Rugby posts have no limited height.

The FA was founded in 1863, and one of its first actions was to specify the requirements for the size and shape of the goal, including the introduction of a solid crossbar.The founding of the FA leads to the modern and well-known game that we have today.

Overall, football has a long and complex history, but without it, we wouldn’t have the game we have today. From its roots in Southeast Asia to Tudor mob football, every part of its history has shaped the modern game.

Just one last thing, we have some really amazing things happening in the next week, so keep an eye out for that.

If you enjoyed this post then please do leave a like. Leave any comments, queries and questions in the comment section below. If you want to see more from The Dugout and be told when I post new content then you can subscribe to the site, just enter your Email address into the widget on the homepage. It’s totally free! Like I said, we have some amazing things happening this week, so stay tuned!
Billy