So on Saturday I got the fantastic chance to conduct an interview with the newly-appointed caretaker manager of FC United Of Manchester, Tom Greaves.

Greavesy, as he is affectionately known by his fans, is currently working as a player-manager, continuing his career as a successful forward. He has scored just under 100 goals in 240 appearances for FC United, and is one of the most popular figures at the club.

Greaves takes over from long-serving manager Karl Marginson, who has been at the club since their inception in 2005, as an alternative to the Glazer-owned Manchester United

FC United had just beaten fellow relegation strugglers Nuneaton town 2-1 in what can only be described as a six-pointer. 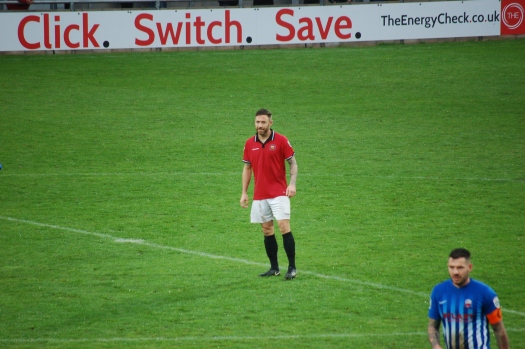 The man himself looking for space.

Here’s how it went:

Q: So you got a crucial 3 points today in what was, possibly, one of the best performances that FC United has produced. How do you think it’s going so far?

A: I’m enjoying it, yeah. We had two great coaching sessions on Tuesday and Thursday.  The lads Jack and Tom had two really great coaching sessions, we worked on things that I thought we needed to work on. We went into the game today, I told the lads to “give me 110% and wear their hearts on their sleeves and realise why they’re at this football club”, and I think they’ve done that.

Q: There seemed to be a bit of a scramble for the second goal, which eventually won it. Do you know who put it in?

A: Haha, Danny Brady will try and claim it, but I think it’s gone in off their player.

Q: It was very tightly contested towards the end, very nervy. Is that something you’ll want to address, or is it just part of the game?

Q: The loose ball was the result of a slip in the goalkeeper’s hands, do you think that someone was at fault there?

A: Not at all, no. The ‘keeper’s been outstanding today they could have had three or four but Lloydy’s pulled out some great saves, so no, I don’t think he’s at fault.

Q: Just one last question. We know a few other higher-end teams have a three, five or ten year plan. Do you think you have one implemented at FC United?

A: It’s a bit early for that at the minute, we’re just taking it one training session at a time, but I’m sure when we sit down and talk about it we’ll get something in place. A bit similar to other clubs I think. We have some fantastic youth talent coming through, so we’d love to make the most of them. So yeah, pushing players through and giving youth a chance is important.

Q: So would you consider going for the job full time?

A: We’ll see. Like I said we’re just going one game at a time at the moment, but I’ve enjoyed it so far, and if I carry on enjoying it then we’ll see. 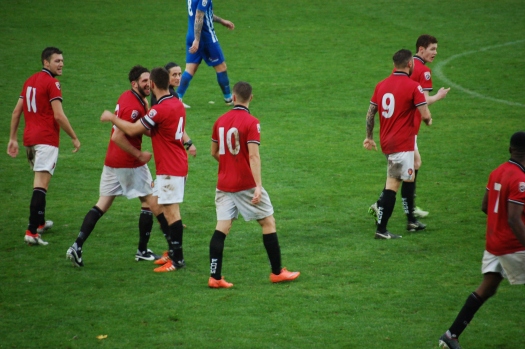 I’d just like to say an absolutely massive thank you to all the guys at FC United who made this possible, with special mentions to George Baker and Tom Greaves. Also photo credits to Nick Midgley.

If you enjoyed this post then please leave a like, leave any comments queries and questions in the comment section below. If you want to see more from the Dugout and be told first when I post new content then you can follow the site, just enter your Email onto the widget on the homepage. There will be a new post out soon, so stay tuned.