If I said to you the words “Football club”, “United” and “Manchester” you would probably think of the club who play at Old Trafford. The club that have won three European cups, 20 league titles, and twelve FA cups. The club who are arguably the biggest club in world football. You probably wouldn’t think of a club who’ve just been relegated to the seventh tier of English football, but you’d still be right to.

You may have heard of FC United Of Manchester. The club was formed in 2005 by Manchester United fans who were unhappy about the sale of the United to the Glazer family. They quickly rose through the leagues, and in 2015 reached the National league north, the sixth division of English football.

However, in recent years, the clubs rapid rise has hit a stumbling block. For three years they’ve been stuck in the lower half of the national League north, and in 2017 lost long-serving manager Karl Marginson. Marginson was replaced by veteran striker Tom Greaves, who’s first non-club led interview came from ‘In The Dugout’. Greaves resigned after a poor start to the season in August of last year, and was replaced by Neil Reynolds.

Finally, at the end of last season, FC United suffered their first ever relegation, finshing second from bottom, ten points off of survival. The squad was in need of a revamp, but most people were still surprised when they retained only seven players from last season, signing over 20 new players for the 2019/20 season.

FC United’s main reason for the breakaway from Manchester United was the takeover of the Glazers, who bought a majority share of the club in 2005, and took it off the stock market and made it a private business, until 2012 when plans were announced to float stock once more. Fans were unhappy as they felt that Glazers had no real interest in football, and only bought the club for the profits they could make out of it. It is thought that the Glazers have taken over £1bn out of Manchester United since the takeover.

Many attempts have been made to topple the Glazers over the years – the ‘Red Knights’ scheme was probably the closest to achieving it, when a group of wealthy fans came together to try and buy out the Glazers, however the attempt eventually fizzled out into nothing. After a few years, the Manchester United Supporters Trust, or MUST, issued a statement saying that they were done with their attempts to topple the Glazers.

More recently, after the success of the team has reduced, support for anti-Glazer movements has increased, with initiatives like #unfollowManUnited encouraging fans to show their lack of support by unfollowing United’s social media accounts. Over 75,000 people took part in the scheme, but this is minuscule compared to the 29.8million accounts who do follow United’s Instagram, and the 19.6million who follow their twitter.

Rumours of a takeover by the Saudi Arabian royal family have been floating around for a couple of years now, as well as more speculative rumours of Amazon boss Jeff Bezos and Britain’s richest man Jim Ratcliffe, who is a Manchester United fan, but these are probably because, with the club’s latest valuation being a cool $3.8bn, they are the only people in the world who could afford to buy the club outright.

FC United’s first pre-season game with the new squad came on Tuesday night, against Morecambe, who will face FC United rivals Salford City in League 2 next season. 536 people attended, including us.

Broadhurst park, the purpose built stadium for FC United, was certainly impressive. It was big, around the same size as Morecambe’s Globe Arena, if not bigger, and was packed with references to their roots as Manchester United fans. They had banners hanging up referencing the Munich disaster, and slogans like “two clubs, one soul” and “Love United, Hate Glazer”. 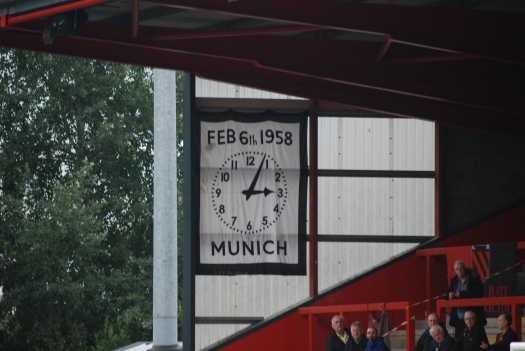 The links with Manchester United are not hidden – Manchester United chants are still sung, often with a loud “FC!” before the word “United”, and it’s clear that the majority of FC United fans still support Man United, either casually or strongly. 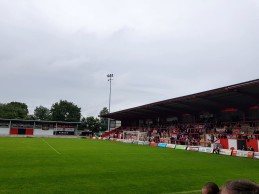 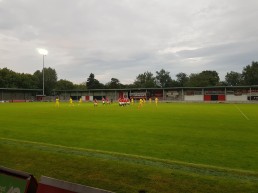 The teamsheets on the night contrasted heavily between the two teams; Morecambe started with a full strength side, consisting largely of experienced players and a couple of new signings, whereas FC United had no option but to play a team which was completely new and had never played together before. The Balance of play was fairly even in the first half, with Morecambe looking more dangerous in attack with their tall strikers Cole Stockton and Kevin Ellison, but FC United still posed a threat, especially down the left wing where number 11, Regan Linney, performed particularly well.

Despite Morecambe’s attacking danger, it was FC United who went into the break with a 1-0 lead, Louis Myers scoring the goal from a pull back after a good run from left back Adam Dodd.

Morecambe came out for the second half with a massively different squad. Many of the experienced first team players were swapped out in favour of squad-rotation players and academy players, as well as two trialists, neither of whom performed particularly well. FC United brought on around seven different players at the hour mark, all of whom performed well, and, despite Morecambe still showing more danger in attack, FC United scored twice more before full time, scoring from a free kick, and then bundling the ball in after a good save from Morecambe ‘keeper Mark Halstead late on. 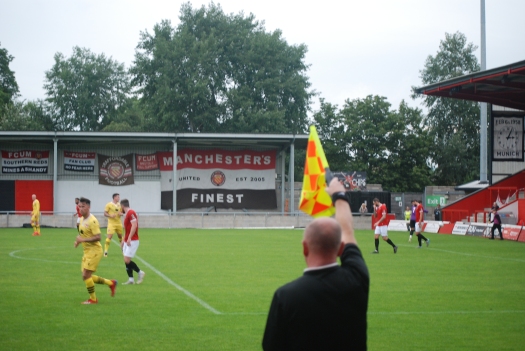 After the game the players showed their class, going up to the main stand and applauding and greeting all the fans, who returned the sign of appreciation with loud chanting. This follows FC United’s core values of a squad who are in touch with the fans, and a club where the fans are an integral part of the club; they are not compromising these values in favour of brand exposure and faster progress up the leagues.

The 3-0 win showed a real quality in the new squad, with a newly put together defence holding resolute against a strong attack, and attacking players not being afraid to take risks and run at defenders.

But what does the future hold for FC United? The new squad looks to have real promise, and if they play like they did on Tuesday night in the league then they will certainly be in with a good chance of going back up. But the main fact is that they are still clearly showing fan orientation, and still hold their founding values of integrity and traditionalism. While United fans’ attempts to oust the Glazers from their position at the top of the club look like they will come to nothing, FC United Of Manchester can certainly say that they are continuing the traditional United values.

4 Replies to “FC United Of Manchester: Fourteen Years On”